The Trust House North Island team series is set for a thrilling finale in the Wairarapa this weekend with overall victory in the series on the line. This Sunday’s final race held on the outskirts of Masterton will decide the overall 2020 Trust House winner in all individual and teams categories.

“The 1.5km hill on the way back from Bidiford is not long but step. The first three riders in the lead of category four finish almost together at the top of Rangitumau in last race so all three of them can climb, in the end will be up to who have the best team support” race director Jorge Sandoval said.
In category one, the Couplands Bakeries-Booth Group team look set to win the team and individual honours.

Madi Hartley-Brown leads by five points from with Boston Bright (Wheelworks team) and George Jackson riding for NZ Cycling Project a further twelve points behind. Hartley-Brown need to finish in the first three places to secure the title.

Bike Manawatu Max Fergusson has been very consistent in previous three races in category two, and providing he finishes in the top ten in this Sunday race he will secure the Trust House title. Bike Manawatu have also a good chance to win the teams title with 12 points in front of second-place WCNI team.

In category three the fight for individual title is much closer with Bike Manawatu Dale Nicolls leading by one point from Wheelworks rider Cameron Wood and Tararua Builders rider Dominique Green a further nine points behind in third place and Riley Tunnicliffe from Bike Manawatu a further point behind in fourth.

Neither Nicolls or Wood are strong hill climbers and with the race featuring a few hills over the last 15km, that could open the door for Green and Tunnicliffe to get among the points and snatch the title. Tunnicliffe showed his hill-climbing prowess in race four, winning the race to the top of Rangitumau Hill.

Bike Manawatu have already wrapped up the team’s title with a 14 point lead over Capital Cycles and Tararua Builders. 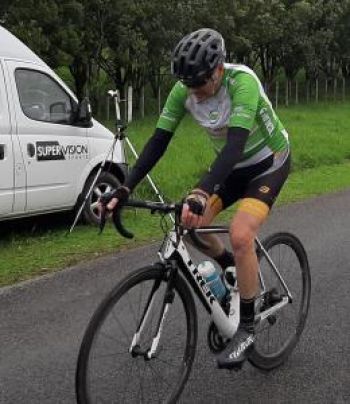 Category four leader Mike Thompson form Luxury tours team probed last race that he can climb with the best and should be right up there in the final race to secure the title.

Wairarapa riders are well-place for top finishes this Sunday. The best chance of local success could be in the team’s championships, Tararua Builders team lead by eight points over Bike Manawatu.
Tararua Builders need three of their riders to finish in the top 10 to secure the title. The team also have Peter James, Andrew Osmond and Emily Lutyens in the top 10 on individual points standing.

“This weekend race will be a very challenging race in what has been described a hilly circuit. Riders will race from Henley Lake in Masterton to the bottom of Dreyers Rock, returning via Whangaehu Valley Road toward Bideford. At Bideford riders turn around and head to the finish at Te Ore.” Sandoval said