Jorge Sandoval has been hoping for the best and preparing for the worst over the last month.

As the event director for the popular Trust House North Island Team Series, a team road cycling series raced through out the Wairarapa over five separate weekends, Jorge has been keeping an extra close eye on the Covid-19 Alert Levels and the implications they pose for events.

“I always look forward to staging the Trust House North Island Team Series as it’s a great event for cyclists to kickstart their season. This year things are obviously more challenging with Covid-19, however since I announced I would run this Series in Alert Level One and with additional changes if we remain in Alert Level Two, I have been inundated with entries! In fact this year’s Series has the biggest field in its seven-year history,” says Jorge.

This year’s series has attracted 237 riders from Auckland, Waikato, Hawke’s Bay, Manawatu, Wellington and Wairarapa, who will make up 26 teams across four categories. 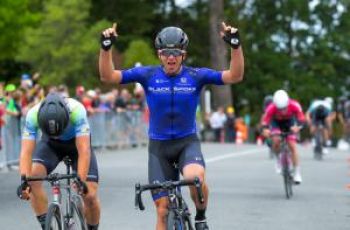 Leading the charge in category one is Black Spoke Pro Cycling Academy, New Zealand’s only Union Cycliste Internationale professional team. The team will be ably led by Aaron Gate, gold medal winner at the 2019 UCI track racing champs in Cambridge and Brisbane and the 2019 New Zealand Cycle Classic tour winner.

What is even more exciting for Wairarapa is that Black Spoke will remain in the region between races one and two for an intensive week-long training camp, says team manager Scott Guyton.

"Black Spoke Pro Cycling Academy is looking forward to returning to the Wairarapa for our training camp in preparation for the Tour of Southland. It’s a great opportunity for Black Spoke to be able to incorporate Jorge’s races into our training camp and we felt it our duty to support Jorge in putting on a race series in such a crazy year,” says Scott.

“While many of our riders have raced in the Wairarapa, the team looks forward to being able to explore the region at a more leisurely pace”.

Jorge is confident the team will enjoy racing and training on the Wairarapa’s rolling roads that weave through the countryside.

"I’ve no doubt their inclusion in the Trust House team series for the first time will make for such an exciting race and if we are in Alert Level One, I encourage as many spectators to get out and watch this team, and the others, in action - they won't be disappointed,” says Jorge.
Trust House Limited’s Chief Executive Officer, Charles Kaka, says Trust House is delighted to provide support again to the series.

“This is the seventh year of the successful series and it is a wonderful boost to the local economy. It is encouraging to see this event returning to the Wairarapa region bigger and better in 2020.”

For the first time in the Series’ history, riders will race in grade categories rather than age groups. In addition women can take part, something that has not happened for four years.

“I listened to feedback from riders who have taken part over the last few years and revamped this year’s Series so riders will be grouped in their ability category as opposed to their age. This means riders will now race against riders of the same ability. The other thing I have done is cater to the growing demand from female riders to race. I’ve two women’s teams with a couple of mixed teams entered which is great.”

The first race in the five-race series begins and finishes at Alfredton School, north of Masterton on Sunday, 27th September. Teams competing in categories 2, 3 and 4 will complete 65km while those in category 1 will complete 102km.

With Covid-19 restrictions currently in place all riders will need to sign in for contact tracing purposes and adhere to good hygiene practises. Jorge has signed up to the ‘Voluntary Code for Events’ which follows best practice expectations, based on Ministry of Health guidance to reduce COVID-19 related risks. He has also taken advise from Cycling New Zealand about best practise for holding cycling events.